In 2009, I went on the first Chiapas Medical Mission Trip that Dr. Andy Bourne had organized, along with the help from our Mexico hosts. I was nervous as it was the first time I would be helping out as a nurse on a medical trip and was so unsure of what to expect. It ended up being a super rewarding trip as we did about 30 surgeries in 4 days. One of my fondest memories was when one of our last patients offered a chicken in exchange for a hernia repair. It was all she could afford and a prized possession. 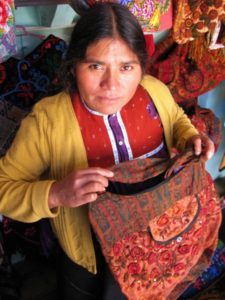 It was incredible to see all of the vibrant colors of Chiapas, not only through the clothes, but through the people’s eyes and souls. They were so appreciative and thanked God out loud after waking up from anesthesia, some not even speaking Spanish that well, only their native Mayan dialect.

The biggest challenge of our medical mission trip for me was the turning away of people who wanted surgery, but perhaps didn’t need it as desperately as some of the other patients. Also knowing that these people were coming by bus, 3 – 6 hours one way, only to be turned down and rescheduled for the next day. It was simply that time ran out. Andy’s goal was to do minimal types of surgeries so as to not leave anyone in a position of needing continued care after we had left. Keep it simple.

I loved the feeling of flying away from Chiapas knowing that we helped 30 people and the fact that Andy would be back with another team of people, just two years later.