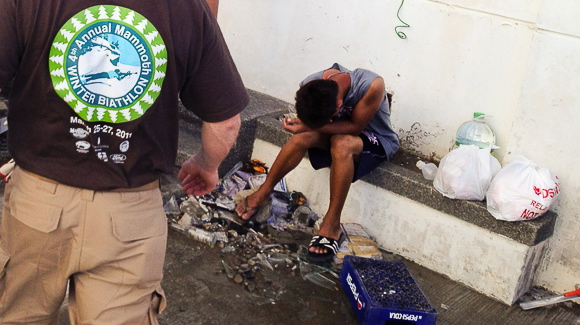 MAMMOTH LAKES, Calif., Nov. 11, 2013 – A team of 16 surgeons, doctors and medical support volunteers from Mammoth Medical Missions, a non-profit, healthcare organization that donates services to underserved rural communities worldwide, is among the first to bring aid to Tanauan, approximately 30 miles south of Tacloban, following Typhoon Haiyan. Members of the Mammoth Lakes-based team were diverted to the Philippines on Friday from a previously planned medical mission to Chiapas, Mexico, enabling them to be among the first groups to provide medical assistance.

After consulting with the Philippine Embassy, the Philippine Red Cross, Pilipinas 911 and Team Rubicon, a Los Angeles-based disaster response service organization, the emergency medical responders from Mammoth Medical Missions will be providing crucial triage and life-saving surgery services. The team arrived at Villamor Air Base in Manila, where they were attached to the 505th air wing of Philippine Air Force for security. They now have set up operations in Tanauan, approximately 30 miles south of Tacloban, which has been hit very hard. The group is equipped with three surgical teams and more than 30 parcels of medical supplies, survival MRE’s and basic camping equipment. The team also has a satellite phone, so status updates will be made daily.

Team leader for Mammoth Medical Missions, Dr. Michael Karch, reported the following via satellite phone today at 2:47 a.m., PST, “The team is in the town of Tanauan, approximately 30 miles south of Tacloban. It is truly mass devastation. We spent an entire day cleaning out the town hall of water and glass, and have set up both our sleeping quarters and medical center there. By the time we began triaging patients, there were about 300 people outside waiting for help. The team performed 55 surgeries in one day. They are mostly amputations and debridement of wounds due to lots of infections. The team has been very well received by the local people and is safe due to the large military detail attached to us. MMM, at this time, is the only aid group in the area.” In addition, Dr. Karch stated that everyone on the team is doing well.

“There are a few times in life when you make a swift, heartfelt decision because you know it’s the right thing to do, even if it means sacrifice, uncertainty and potential danger,” said Karch, who also is CEO of Mammoth Medical Missions. “When we heard about the magnitude of this storm, we quickly convened our board and decided to change the course of a routine medical mission and respond to this large-scale disaster. I am confident our team has the skills, compassion as well as mental and physical endurance to meet this challenge and save lives.”

The decision to re-deploy the Mammoth Medical Missions team has come at a large financial cost to the members, who made new travel arrangements and helped secure additional medical supplies. “We quickly moved from needing to support a routine medical mission to being a first responder in a massive disaster relief effort,” added Gilanne Bourne, treasurer of Mammoth Medical Missions. “Obviously, we weren’t able to conduct any fundraising to secure donations or in-kind gifts in advance of this emergency mission, so we are grateful for any support from the community and well-wishers everywhere to help us aid the people of the Philippines.”

Donations can be made directly at www.mammothmedicalmissions.org/donate.