Dr Fru Bahiraei and I were guest surgeons at the International Meeting on Simulation in Health Care held in San Francisco this week. We were accompanied by Wes Davis (pilot) who flew us to the Bay Area this afternoon. Our role was to test and demonstrate the utility of the Human Cut Suit for surgical and mass casualty training within the civilian sector. 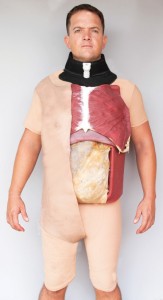 The Human Cut Suit was invented by Col. Tony LaPorta MD and now owned by Worldpoint in Chicago, IL. The innovative model, which up until now has been used to train only US military combat medics and surgeons in the Iraq and Afghani war theatres is being released to the civilian sector for ultra-real training scenarios. The Cut Suit is a rubberized suit worn by a live actor. It has full end organs and bones and bleeds when cut by a knife. Virtually all life saving procedures can be done on the suit. All echelons of the trauma code ranging from the first on scene through the tertiary trauma surgeon can benefit from this kind of new learning simulation.

The simulation involved a 35 year old male who was subjected a terrorist induced IED explosion in a downtown hotel lobby. The patient received massive internal injuries included an inhalation injured airway, a tension pneumothorax secondary to the concussive effect if the blast, a splenic injury causing internal hemorrhage, an open and unstable pelvic fracture and an arterial bleed from the femoral artery.

This was Dr. Bahiraei and my first time using the Cut Suit simulation and we did not know what to expect especially in front of a live audience, video and tv cameras in a timed pressure scenario.  After being triaged in the field by the San Fransisco Fire and EMS, the patient was immediately brought to our operating room. The 6 pm demonstration took us approximately 7.5 minutes to complete an emergency crich, chest tube placement, exploratory laparotomy, emergent splenectomy, pelvic external fixation and tourniquet of the femoral arterial bleed. We were covered in blood as onlookers peered over our shoulders. Our endpoint was damage control. The second go around at 8 pm showed a 65 second improvement for the same maneuvers. 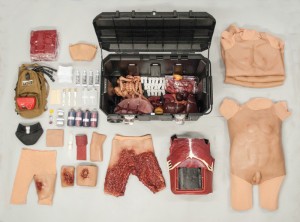 The teaching benefits of this type of simulation training to medical students, resident doctors and attending physicians becomes immediately obvious. Equally important, however, a tool such as this also trains those who respond in the field to evaluate, triage, treat and communicate information up the echelons of trauma care. Clearly the dynamic nature of trauma as well as the unspoken flow between surgeons in a trauma code can be rehearsed and honed with a live simulation actor that can be actually operated on. We were allowed to teach along the way to the audience and a question and answer session followed. The were members of the FBI as well as various medical teaching institutions both domestic and foreign were present.

Overall it was a privilege to be one of the first civilian surgeons to test this new tool. Clearly it is the future for surgical and mass casualty training and we hope to be able to bring this training device back to Mammoth for the Mammoth Mass Casualty Seminar in September.