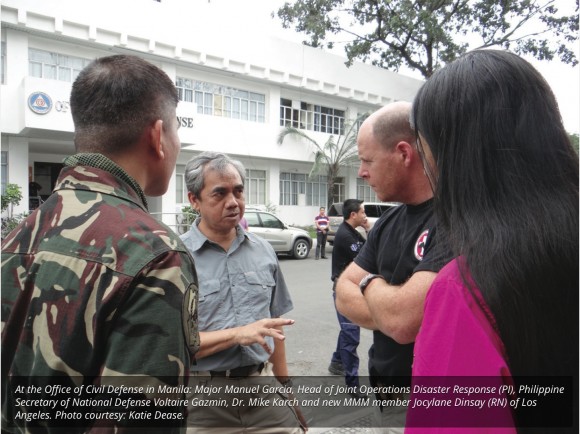 Mammoth Medical Missions makes a return trip to the Philippines.

On December 5, one of two Mammoth Medical Missions (MMM) teams arrived in the Philippines three hours before Super Typhoon Hagupit hit land. The team of seven was prepared to ride with a police convoy south from Manila toward Samar, where it would arrive at a site, set up, hunker down, and wait for the second team of 11 to join 24 hours later.

“Then something weird happened,” recalled MMM co-founder and CEO Dr. Mike Karch; “Our driver didn’t want to drive.” As it turned out, terrorist group Abu Sayyaf had bombed the road. Soon after that, the New People’s Army, a Maoist insurgent group, also emerged as a threat to foreign relief efforts.

As a result, both MMM teams were detained in Manila for several days. By the time they were ready to head to the southern site, “The storm was actually downgraded,” Dr. Karch said. “The President made the call on the fourth day [Dec. 9] that foreign medical teams were not needed.”

After a whirlwind trip, MMM returned to the U.S. on Dec. 10. But Dr. Karch considered this mission, like the mission to the Philippines after Super Typhoon Haiyan devastated the country, to be a success, if of a different kind.

Read the whole story in The Sheet…